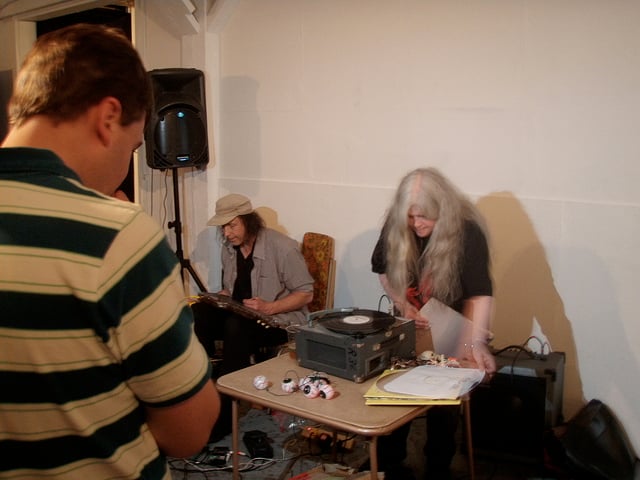 The Tenses is a duo comprised of Ju Suk Reet Meate and Jackie Oblivia, two veterans of the weirdo art collective that is known as theLos Angeles Free Music Society. They also form the core of legendary experimental juggernaut Smegma.

The LAFMS have been a singular force in DIY culture ever since the early seventies and encapsuled an endless string of projects and bands that married a sort of proto-punk with trashy guitars, avant-garde music, tape manipulations, free jazz, improv and absurd vocalizations into a hyper original and singular form of music. They're seen by many as the originators of noise music, and have been an immense influence on bands like Sun City Girls, Merzbow, Wolf Eyes, No Neck Blues Band, etc…

The Tenses is one of the latest vessels for Ju Suk and Jackie to explore the outer realms of sound and space. Compared to the mothership that is Smegma, it is a more compact and intimate project where turntables, tape collages, distorted surf guitar and coronet are used to create elaborate, haunted atmospheres.
After releases on Harbinger Sound and their own Pigface Records, The Tenses now add another chapter to their history with 'Howard', their new LP on Belgian imprint audioMER. 'Howard' is a mind expanding tour de force that scrambles spoken word deconstructions and spontaneous freak outs into a musical non-sequitur; a strange and disorienting trip.

Loops of voices from long lost instruction movies, shortwave radio dramas that get overrun with sirens, various non-instrumental sounds, and an bewildering stretch of Link Wray-like guitar riffs; 'Howard' is a record that oozes paranoia, the perfect soundtrack for making explosives in your basement.