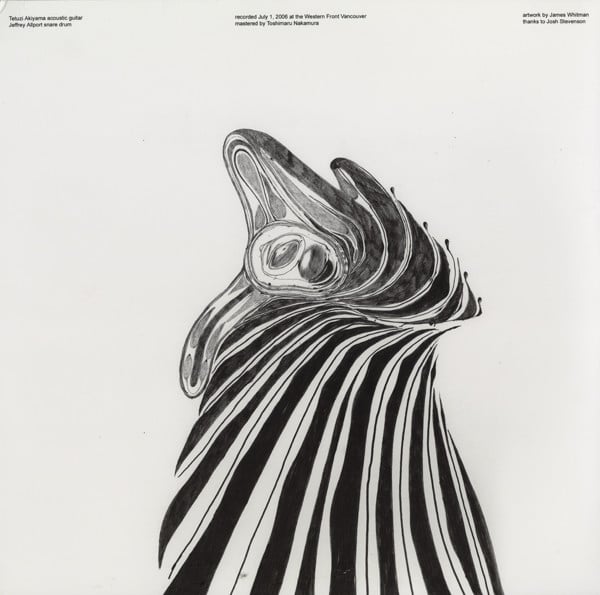 The Japanese guitarist Tetuzi Akiyama performs an improvised set as a duo with Canadian percussionist Jeffrey Allport on July 1, 2006. This recording is of the first and only time these two well-regarded improvisers have ever played together. Living on opposite sides of the Pacific, this show became an opportunity for Allport and Akiyama to each perform some of their most advanced techniques in improvised music with a player whose style was truly compatible. Allport approaches every side of his drum, the rim, the snares, the steel clamps, and of course, the skin to produce a challenging repertoire of sounds that defy the drum's gambit, segues from Tibetan drones to electronic clicks and cuts, distant steamships to nearby popcorn. Akiyama's preternatural improvisations along the neck and body of his guitar meditate patiently on each bluesy sound, almost as if his fingers were playing along the surface of a slow-moving river. Every note that Akiyama plays becomes a sensational interruption causing ripples, splashes, and oxbows in the flow of the music. Performed live at a sold-out Western Front, Vancouver's oldest and most significant artist-run venue, Akiyama and Allport propose a rich new vocabulary for music. Two tracks on vinyl mastered by Toshimaru Nakamura. This LP documents an unprecedented collaboration between two modern masters of far left improvisation.