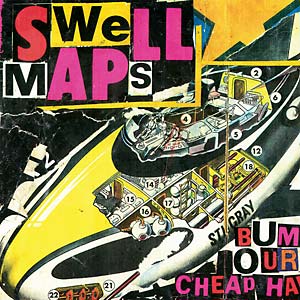 SWELL MAPS
Archive Recordings Volume 1: Wastrels and Whippersnappers
MUNSTER RECORDS (SPAIN)
LP
MR 344LP
The early, wild and experimental home recordings of Swell Maps, released on vinyl for the first time. "In the context of our hum-drum hometown, I think that it's safe to say that we were all oddballs, and we gravitated to each other because we got our kicks by making sounds. It was the only thing that seemed to help us to make sense of the world around us, and it was also bloody good fun! Nikki and Phones started to play together in 1972, and Epic soon joined in on percussion. I was a schoolmate with Nikki, and I was inspired by them to start making music as well. I managed to buy a second-hand guitar from a rich kid at school in 1973, and we would all play together in various combinations of two or three, according to who was around. Nikki was the only one of us into singing at this time, but he was encouraging me and the others to vocalize as well. John started to play with us in 1975, I think. He would invent some tunes with unusual riffs and time signatures. Richard joined our little scene later in 1976. It was unusual for any four of us to play together at the same time, but when we went to our first recording session in 1977, there were six of us in the studio, but only four playing instruments. Richard was driving us in his mother's car and he ended up singing on one of the songs, 'Ripped and Torn.' Phones did not want to play live on stage, so with Richard we made up the four-piece version of the band which became our regular line-up for gigs. In the studios, it was more flexible -- we were more of a co-operative, with all six members coming along with tunes and ideas, and even confidently improvising tracks on the spur-of-the-moment. Because we had no money for 'professional' equipment, we would play various guitars though small amplifiers and old radio sets, plus an old army surplus speaker cabinet that I had picked up. Epic saved up for a snare drum, then a hi-hat and later a bass drum to gradually add to the options we had for making sounds. I got hold of a ratty old bass guitar which I hacked up a bit in my dad's garage. I found a balalaika which made a dreadful din, and bought a brand-new zither from Woolworths, of all places! We also had some primitive electronic effects made by a friend, including a ring modulator, a tremolo and a terrific fuzz box. We made good use of found objects, household objects such as cushions, trays, kitchen utensils and a fire bellow. For one session we used some items I found in a toy shop which were made for the strange noises used in teddy bears. We also used radio sets to make random noise, and manipulated old records on turntables. Epic devised a way of manipulating an air lock in the household plumbing to make a bizarre, alarming random rhythm! Nikki set up our solitary microphone on a camera tripod. Phones devised a guitar which could fold in half; I still cannot work that out! He also discovered that headphones could be adapted to use as a microphone. We would often record on a variety of portable cassette machines in mono, but John had a fancy reel-to-reel machine that he'd bring along for special occasions. Most of our music was made in secret, like a fiendish experiment, and we never had a notion at the time of a career in music until we made the quantum leap of making a record, but that is another story."